We want a Europe that counts! For consistent policy positions of the European Union in the major global forums on food and nutrition 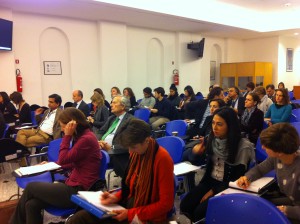 This event targeted an often overlooked aspect of Policy Coherence for Development: the positions that the European Union defends in the major global forums where important food policy decisions are taken, many of which are housed in Rome. European CSOs appreciate the dialogue that has grown up with the EU Delegation and MS representatives in Rome since the reform of the CFS in 2009. At the same time, they would like to see the EU taking strong and coherent positions in defense of the right to food, sustainable family farming and local food systems, along the lines presented in the Concord position paper on food security “Justice, Democracy and Diversity in our Food System”.

The meeting, ably chaired by senior officials of FAO and IFAD, opened with welcoming reflections on the theme of the day by the Head of the EU Delegation and a representative of Concord Italy. The first panel focused on the EU’s strategic role in negotiations in the Committee on World Food Security (CFS) and the International Conference on Nutrition (ICN2) during the period of the Italian Presidency. Spokespersons for the EU and for civil society shared their assessments of the negotiations on responsible agricultural investment principles (rai) adopted by the CFS in October 2014 and the outcomes of the ICN2, held in November. In the second panel the debate focused on two key transversal themes, here too in the form of a dialogue between spokespersons for the EU and for civil society: what role for the corporate private sector in the fight against food insecurity and in the governance of food? And: the right to food or trade – which should prevail ? Conclusions were drawn by the Director General for Cooperation and Development, MAECI and the Head of the EU Delegation.

The dialogue session highlighted important areas of consensus between the EU and civil society. These include the priority attached to public policies and the role of the State in establishing regulatory and legal frameworks; the need for checks and balances to address power differences among actors in all settings, from global negotiations to markets; the privileged role of small-scale producers as actors and of a rights-based approach as the foundation for food security; the need to design the future governance of nutrition, in follow-up to ICN2, in such a way as to defend the principle role of governments in implementation and ensure strong normative guidance and policy coherence.

Other issues were identified as constituting fertile terrain for further discussion. These include how best to strengthen weak but fundamental aspects of the rai – like monitoring and the role of the State; whether the EU can “accommodate all interests” or have to be stronger in favor of the right to food and small-scale producers; whether small-scale local food systems and large-scale global chains can work well together and if so under what conditions; whether the CFS should be empowered to discuss the food security implications of trade while respecting the negotiation prerogatives of other forums. Opportunities to take the discussions forward during 2015 will be offered by the CFS High Level Forum on Connecting Smallholders to Markets, the European Year of Development, EXPO 2015, but it is important to also create space for informal exchange – like that afforded by this event – which was appreciated by all participants.