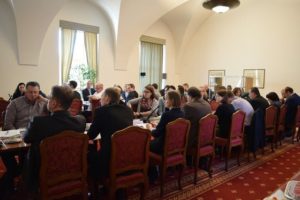 The roundtable discussion spanned over a number of topics beginning with the migration-development nexus, touching upon EU’s policies in Africa at large, focusing closely on the use of EUTF in Libya and Ethiopia, and going all the way to the particular involvement of the Czech Republic.

There was little debate over whether Europe had witnessed a “crisis” (call it migration, political, crisis of solidarity or otherwise). Most seemed to agree that this situation called for exceptional measures, such as the establishment the Emergency EU Trust Fund for Africa. However, in face of the recent substantial drop in the number of irregular arrivals, and EU’s continuing role as a key development actor in Africa, there appears to be a need to move into another phase of strategic (long-term) policy response in which “emergency” tools either cease to exist or transform substantially. It was also underlined that when outside the crisis, an increased level of scrutiny (instead of just channeling money less or more haphazardly) is very much needed.

It was repeatedly stated that a clear-cut line should be made between the allocation funds for security/border management and funds for development cooperation. The latter must always adhere to the key objective of poverty eradication and to the agreed development principles in place, vis-á-vis the 2030 Agenda for Sustainable Development. These include notably development effectiveness, transparency, and local ownership, making sure that needs of the most vulnerable are taken into account. This could be a plausible answer to the question, which gave the event a name.

In terms of the Czech involvement, Ethiopia where EUTF has demonstrably contributed to development objectives and where multiple local development actors have operated, was mentioned as a good practice of the use of EUTF which may be useful to replicate. More concern was voiced in relation to the recently pledged 8.75 million euro for the training and equipment of Libyan border guard, to be implemented by Italian MoI.