Mostly funded through EU development aid, the EU Emergency Trust Fund for Africa (EUTF) is one of the most prominent elements of the EU’s response to the so-called “migration crisis” since 2015. It raises the fundamental question among many development actors of whether tools and practices of development aid are becoming tied to achieving EU’s migration control political objectives, thus loosing accountability to their initial allocation, but also to human rights obligations.

In December 2017 Concord produced a research report intended to monitor the use of EUTF in three countries: Ethiopia, Niger and Libya. Based on evidence, analysis and recommendations for action emerging from this report, and from newly produced policy briefs, the project “Bringing the Trust Fund for Africa to account” aims at empowering decision makers at national and EU level to request a review and re-orientation of EUTF processes and interventions. Through advocacy and dissemination activities taking place in Italy, France, the Czech Republic, Germany, Sweden, Spain, the Netherlands and in Bruxelles, decision makers will be made aware of contents and recommendations contained in Concord’s research report; they will be invited to enter a public discussion through workshops, lobby meetings and media occasions; and to promote the reorientation of the EUTF, based on a new critical understanding of the need to decouple European development cooperation from migration control aims.

The project is part of Concord’s ongoing work on migration and development, and is implemented by Concord Italia, Coordinadora de ONG para el desarrollo, Concord Sweden, Partos, Coordination Sud, Venro, Consortium of Migrants Assisting Organizations. It's supported by a grant from the Open Society Initiative for Europe within the Open Society Foundations 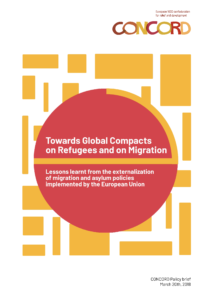 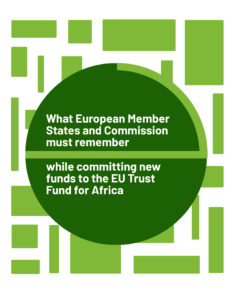